currently in no particular order:

Transexual: Person whose sexual identity is opposite to their assignment at birth. Transsexual individuals, experiencing intense discomfort with gender roles and/or bodies, may use medical treatments to make their bodies more congruent with their internal self-images. These treatments may include hormone therapy, surgery and other social and legal changes. Not all TS folk have gender confirmation surgeries, for various reasons, including personal preference.

Individuals who do not identify with their birth-assigned genders and sometimes alter their bodies surgically and/or hormonally. The Transition (formerly called “sex change”) is a complicated, multi-step process that may take years and may include, but is not limited to, gender confirmation surgery.

Transgender: Refers to those whose gender expression at least sometimes runs contrary to what others in the same culture would normally expect. Transgender is a broad term that includes transsexuals, cross-dressers, drag queens/kings, and people who do not identify as either of the two sexes as currently defined. When referring to transgender people, use the pronoun they have designated as appropriate, or the one that is consistent with their presentation of themselves.

Trans*: is a quick, shorthand way to symbolise that your definition of ‘transgender’ is the widest, most inclusive form. (the asterisk is a wildcard, denoting that several different suffixes could apply). This could be short for ‘transsexual’, ‘transgender’, ‘transvestite’, ‘trans man’, ‘trans woman’, ‘(gender) transgressive’ or ‘(gender) transcendent’. There is also the implication that the wildcard invites and includes the reader’s own personal self definition. As such trans* is understood to also include genderqueer, gender variant and gender non-conforming people, and all other potentially transgender identities. (http://practicalandrogyny.com/2011/04/28/transgender-organisation-inclusivity/)

Intersex: Previously referred to as a hermaphrodite. “Intersex” is a general term used for a variety of conditions in which a person is born with a reproductive or sexual anatomy that doesn’t seem to fit the typical definitions of female or male. (http://www.isna.org/faq/what_is_intersex)

Crossdresser: Someone who enjoys wearing clothing typically assigned to a gender that the individual has not been socialized as, or does not identify as. Cross-dressers are of all sexual orientations and do not necessarily identify as transgender. Cross-dresser is frequently used today in place of the term transvestite.

FTM (Female-to-male): A person, assigned female at birth, who has an internal sense of himself as male. There is a full range of expression for one who identifies as FTM, from living full time as a man, having had surgery and/or hormone treatment, or identifying privately as male.

MTF (Male-to-female): A person, assigned male at birth, who has an internal sense of herself as female. There is a full range of expression for one who identifies as MTF, from living full time as a woman, having had surgery and/or hormone treatment, to identifying privately as female.

Sexual Orientation: who you find erotically attractive: opposite (hetero), same (homo), both (bi), neither (asexual). Transgender people may identify as gay, lesbian, bisexual, or asexual, just as cisgender people do.

Asexual: An asexual is someone who does not experience sexual attraction. Unlike celibacy, which people choose, asexuality is an intrinsic part of who we are. Asexuality does not make our lives any worse or any better, we just face a different set of challenges than most sexual people. There is considerable diversity among the asexual community; each asexual person experiences things like relationships, attraction, and arousal somewhat differently. (http://www.asexuality.org/home/overview.html)

Gender: Gender can refer to sense of self (gender identity), perception of self by others (including gender recognition or misgendering), behavior, expression, and role. There are both psychological (arising in the mind) and socio-cultural (determined by others, ideas about what is masculine and feminine, and role expectation) aspects of gender. Along with one’s physical traits, it is the complex interrelationship between those traits and one’s internal sense of self as male, female, both or neither as well as one’s outward presentations and behaviors related to that perception. (http://www.genderspectrum.org/understanding-gender and http://genderqueerid.com/gq-faq)

Gender Expression: Refers to the ways in which people externally communicate their gender identity to others through behavior, clothing, haircut, voice, and other forms of presentation. Gender expression also works the other way as people assign gender to others based on their appearance, mannerisms, and other gendered characteristics. Sometimes, transgender people seek to match their physical expression with their gender identity, rather than their birth-assigned sex. Gender expression should not be viewed as an indication of sexual orientation, or gender identity. (http://www.genderspectrum.org/understanding-gender)

Gender nonconforming: A term for people whose gender expression differs from stereotypical expectations, such as “feminine” boys, “masculine” girls, and those who are perceived as androgynous. This includes people who identify outside traditional gender categories or identify as both genders. Other terms that can have similar meanings include gender diverse or gender expansive. (http://transequality.org/Resources/Model%20District%20Trans%20and%20GNC%20Policy%20FINAL.pdf)

Cisgender: A person whose sex assignment at birth corresponds to their gender identity and expression. Referring to cisgender people as ‘non trans’ implies that cisgender people are the default and that being trans is abnormal. (http://www.basicrights.org/uncategorized/trans-101-cisgender/)

Sex: Sex is biological and includes physical attributes such as sex chromosomes, gonads, sex hormones, internal reproductive structures, and external genitalia. At birth, it is used to identify individuals as male or female. (http://www.genderspectrum.org/understanding-gender)

Drag King: A female who emulates a man in appearance and manner, generally for the purposes of entertainment, and not necessarily because the person identifies as a man or as transgender.

Drag Queen: A male who emulates a woman, in appearance and manner, generally for the purposes of entertainment, and not necessarily because the person identifies as a woman or as transgender.

Genderqueer: Genderqueer is a term used to describe those whose gender is non-binary and /or non-normative (“queer”). See a collection of definitions from various print and web sources at Defining Genderqueer.

Binary Gender: A system that defines and makes room for two and only two distinct and opposite genders (male and female). These two genders are defined in opposition to each other, such that masculinity and femininity are seen as mutually exclusive. In this system, there is no room for any ambiguity or intermingling of gender traits.

Biological Sex: This can be considered our “packaging” and is determined by our chromosomes (XX for females; XY for males); our hormones (estrogen/progesterone for females, testosterone for males); and our internal and external genitalia (vulva, clitoris, vagina for females, penis and testicles for males). About 1.7% of the population can be defined as intersexual—born with biological aspects of both sexes to varying degrees. So, in actuality, there are more than two sexes.

Queer: Historically a negative term used against people perceived to be LGBT, “queer” has more recently been reclaimed by some people as a positive term describing all those who do not conform to rigid notions of gender and sexuality. Queer is often used in a political context and in academic settings to challenge traditional ideas about identity (“queer theory”). Used as an umbrella identity term encompassing gay, lesbian, questioning, bisexual, non-labelling, transgender people, and anyone else who does not strictly identify as heterosexual.

SOFFA: which stands for Significant Other, Friends, Families, and Allies: refers to the people close to the person who is transitioning or transgender. These people, particularly partners and other family members, also go through a transition related to their relationship with the trans person.

Pre-op: Term used within some transgender circles to describe individuals who have not undergone and surgical changes to their bodies.

Post-op: Term used to describe individuals who have had a surgical procedure to change an aspect of their appearance.

Chest surgery: Typically refers to when a person is having their chest reconstructed to fit the sex they seek to identify with – this may mean having fuller breast implants or having breasts removed.

Facial Feminization: Various procedures that are done to change the shape of their face to make it more feminine.

Bottom Surgery: Typically refers to when a person is having their genitalia reconstructed to fit the sex they seek to identify with.

Penectomy – Removal of the penis, where the shaft of the penis is used to create the neo vagina.

Phalloplasty – Construction of a penis typically using skin from ones forearm

Opherectomy – removal of the ovaries

Cross-Hormonal Therapy: the use of testosterone (FTM) or estrogen (MTF) to biologically produce secondary physical characteristics.

Have me speak at your school or organization

“Not only is justin a charming, warm, caring, talented, brilliant and engaged human being, he’s also a compelling speaker. I’ve heard Justin present, and I was deeply impressed by his ability to discuss complex issues in a way that is accessible, smart, amusing and moving. Justin has a lot to say, and I hope he never shuts up!”
–Robyn Ochs

“That was the most FUN, informative & insightful workshop that I’ve had here on campus in the 8 ½ years I’ve been here and all I’ve been “forced” to participate in. I really wanted to thank you for not only being able to help this office, but I’m incredibly grateful you’re here for our student body too.”
-Nicole Wilson
Office of the Registrar, Williams College

“THANK YOU so much for coming to the 2012 UMass Dartmouth LGBT Youth Symposium !! You really rocked it so hard. we gave the students evaluations, and 80% said that their favorite part of the day was your presentation…because you were very informative yet very funny 🙂 Great stuff !”
-Amanda Fraser
Programming Coordinator UMass Dartmouth Center for Women, Gender and Sexuality

“justin speaks from the heart and has a way of challenging the listener to question their own assumptions about the world, each other, and themselves.  His honesty and insight will inspire a whole new generation of people to live their truth.”
-Dru Levasseur

“Thanks, justin.  We thoroughly enjoyed your presentation last Friday and learned a lot.  It has already made me much more alert to innuendos and slang that I need to address promptly.”
-Jeanne Filiault
Principal Hancock Elementary School

“Now is a critical time to be an LGBTQ and ally leader, as public opinion is shaped. The time we spend as leaders impacts who we are, whom we love, how we choose to live, and how we can live in our communities. These are opportunities to create change to transform our own lives and the lives of those around us. I had the good fortune of becoming friends with justin adkins some years ago, and I learned quickly that he is a powerful leader in inspiring this kind of cultural change. On countless occasions, I have witnessed justin fearlessly fight for the LGBTQ community and set forth to educate those around them, including his antagonists. justin does a masterful job when speaking about this cause that he is so passionate about and it is with great enthusiasm I throw my support behind any venture justin undertake.”
-Shani London-Kane 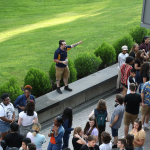 justin adkins is an educator, consultant, and life-coach living in Williamstown, MA. He worked in higher education for 14 years, most recently as Associate VP for Student Affairs at The College of Wooster (2020-2021) Previously justin was Associate Dean of Students in charge of conduct and Director of the Inclusion, Diversity, Equity, Access, Social Justice (IDEAS) Center at Allegheny College (2016-2020) and former Interim Director of The Davis … END_OF_DOCUMENT_TOKEN_TO_BE_REPLACED

“If you have come to help me, you are wasting your time. But if you have come because your liberation is bound up in mine, then let us work together.” -Lila Watson justin has over 15 years of experience in life coaching, consulting,  leadership and anti-oppression based education in non-profit, educational, and religious organizations. He has led multicultural social justice based trainings in a variety of settings including social service … END_OF_DOCUMENT_TOKEN_TO_BE_REPLACED

ho·lis·tic - adjective \hō-ˈlis-tik\ Characterized by comprehension of the parts of something as intimately interconnected and explicable only by reference to the whole. I have been a life coach, primarily working with 15-24 year olds, since 1999. I believe that everyone needs someone to bounce ideas off of and part of thriving is working with others to discover your full potential. Looking at life from a holistic approach we can discover new … END_OF_DOCUMENT_TOKEN_TO_BE_REPLACED